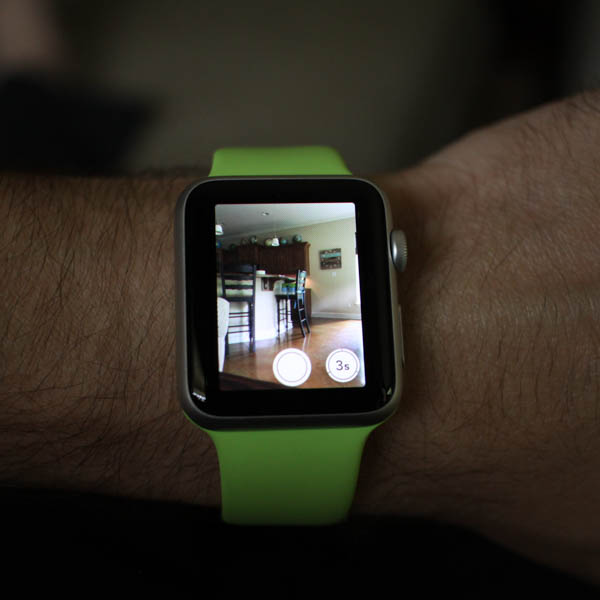 The honeymoon stage with my Apple Watch is starting to fade.  A commenter wrote yesterday on a post how he hopes the Apple Watch doesn’t become an un-useful watch as his Nike Fuel Band became after about 3 months.  I am wondering the same for me. But the good news here is that I am becoming sensible in my review of the Apple Watch, which is a good thing.  At least I think it is.

To give you a little context, I have only worn my Apple Watch out twice since I have had it.  It felt cool to have it on and and many people asked about it.  In every social setting I was in the Apple Watch was the center of conversation.  No lie.  Everyone asks about it and I was not trying to be flashy.  It was fun to talk about and people gave me some feedback on what they are interested in with it.  My impression is most people (like I did) will expect it to do more than it can.

It was also handy in both outings as I will describe.  The rest of the time I have had it on I have been around the house doing odd jobs for our small business and hanging out with my family.  So keep that in mind.  I don’t think I have been able to really explore how useful (or not useful) the Apple Watch is during my day to day work life or in more social situations.  I will know more about that next week when I am back at my full time job after being off for a week.

One of the things I figured out yesterday is that you can activate Siri on voice command with no buttons. I can turn the Apple Watch toward me which activate the watch display and say “Hey Siri” and it perks up and is ready to receive a command.  At this point I would say that 40% of the time it can perform the task, and the other 60% of the time it wants to defer me to my iPhone.  But it can easily begin a text, make a call or open any App extension that is on your Apple Watch.  Remember, I said “App extension”.  I think using this language helps keep it in perspective.  Also, this also requires speaking. I don’t know about you, but that is not always very convenient, especially if I am with other people who are around.  This might change as social expectations change thorough the years and it becomes increasingly common to talk to you device, especially in front of others.  How about you? Do you feel funny talking to Siri in public?

Also, here is an annoyance I found.  When you talk to Siri on your iPhone, it responds with an alert or Siri dictates back to you what you said so that you know it understood.  So far, this has not ever happened with the Apple Watch.  Every time I give it a command, I am waiting for an alert or Siri’s voice to tell me it got it.  It doesn’t even vibrate.  This could be big trouble in the car.  I might need to research this more. It could also be a setting that I haven’t found yet.

Another annoyance.  While your Apple Watch is thinking, it is easy to put your hand down instead of keeping it up.  The Apple Watch screen then goes dark and sometimes it is hard to get it to wake back up.  Or you just want glance at its progress without lifting it into its “proper watch reading” position, if that makes sense.  Like right now as I type this, I want to glance at the time.  My Apple Watch is easily in view, but the screen is dark.  I have to make a more concrete gesture with my wrist to get it to turn the screen on to see it.  This is a little annoying, but I understand that it might just be the reality of it to save battery.  And you don’t want a bright screen on all the time.  But truthfully, a lot of us glance at our watches when they are not in the “proper watch viewing” position.  Just something to think about.

One of the biggest perks of the Apple Watch that I discovered was being able to remotely control my the camera shutter button on my iPhone.  This came in super useful when we wanted to take a family picture in front of our new van.  My BookBook case is a huge help for this as well because I can automatically prop my iPhone up. The first two photos show an example from in my house.  The third photo is the one I was able to take remotely from my Apple Watch.  You can see the Apple Watch on my left wrist in the photo. 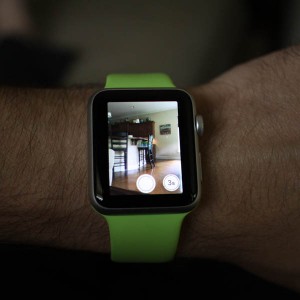 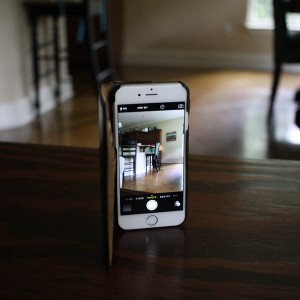 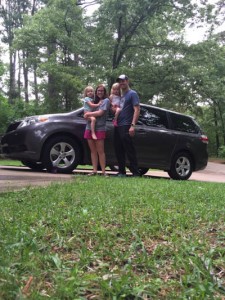 I mentioned being out and about two times since getting the Apple Watch.  I discovered two very useful and safe benefits to it.  The first was making a call in the car.  I was able to actually call a buddy of mine directly from using a Siri command a we had a good conversation while talking through my Apple Watch.  As you can see in the picture I kept my Apple Watch on my wrist on the top of the steering wheel and it worked great.  I know, the picture being taken was unsafe but I wanted to show you what this looked like in real time. Here I am talking to my friend while driving.  Super easy and safe. 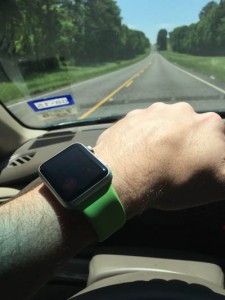 The other useful feature was being able to control the music from my iPhone.  I plugged my iPhone into our van’s auxiliary input and pressed play.  Whenever one of my kids wanted to hear a song over again, I just swiped up to the “glances” on Apple Watch and was able to repeat the song without having to look at my iPhone.  Staying away from my iPhone while driving is a great thing.  I haven’t done it enough to know if the Apple Watch will begin to be a distraction or not.  So far, it has only been positive.  Honestly, these two features might be all that sends me over the edge of keeping it, especially because I have to drive a lot for work.

Lastly, I need to cover range.  How far can the Apple Watch get from the iPhone?  So far, I have not been super far away and it works well all around my house. However, there are moments when it is having trouble connecting quickly, especially when accessing third party apps.  This is why it is a negative in my opinion.

Most of the time I have been in the garage and there is about 20 feet and a few walls separating my iPhone from my Apple Watch.  I have been able to send and received texts with no problem.  Probably the best moment I had with the Apple Watch was when I was in our office next to our bedroom working on the computer for some Field Treasure Designs stuff.  I had to call UPS about something and realized I had left my iPhone in the kitchen.  All I did was say “Hey Siri” and then I said the numbers I had to call and was able to not only make the call but have a  successful conversation with the customer service rep, all through my Apple Watch.  That was pretty nice.

As far as range goes, after doing a lot of research, I have discovered that the range is about 300 feet.  However, that is if there is no other radio waves or signals in the area. I have read multiple times that the Apple Watch and iPhone connection can easily be interrupted.  But I think it is safe to assume that you could leave your iPhone at your desk and walk around the office or leave the iPhone in the car while you run into a small store.  Keep in mind, though that when you are out in public with lots of other people, there are probably a lot of other signal jamming possibilities.  I have not discovered how your Apple Watch and iPhone connection is interrupted if there are lots of other people with an Apple Watch in the area as well.  I am guessing this might get very complicated.

I just performed a test on the range of the Apple Watch to my iPhone.  I left my iPhone on the couch and walked out to our street in the front.  That is about 25 yards away.  We also live in a neighborhood without many homes right by us.  We have one neighbor across the street and lots of trees all around for reference.  I was able to (from the street) ask Siri to text myself and sent myself a text.  It was a little delayed but it worked.  I figure being able to be outside doing yard work or something and be able to interact with loved ones or a friend via text or phone call is nice.  So far so good.  I decided to walk up the street and at about 50 yards, I got this message on my Apple Watch. 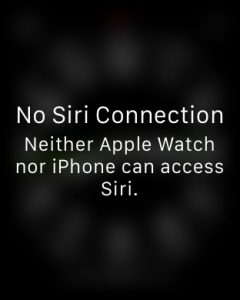 So there you go.  It is decent at about 25 yards and through a couple of walls with very little radio interference but if you go beyond that, expect it to be rough.  Now this is not an airtight experiment, just a simple example.  I do think if Apple wants the Apple Watch to be truly useful it needs to be able to have a solid range away from the iPhone, otherwise you are always still worrying about where your iPhone is and if it is within range.  That is something I don’t want to always have to do.  The best places are probably in the following:

You will lose connection to your iPhone on a run or jog.  But it will continue to track all your movements (I think).  I haven’t tested this yet because I got sick this week and don’t want to work out.

Ok I hope that helps!  Let me know if you have more questions or comments. I will try to get closer on deciding if I will be keeping it or not by the end of the week or weekend.

Thanks for subscribing! Check your email for details on how to get the project plans.